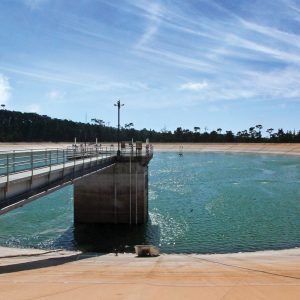 The CAWD/PBCSD Reclamation Project is a cooperative effort of three public agencies including PBCSD, the Carmel Area Wastewater District (CAWD) and Monterey Peninsula Water Management District (MPWMD); and one private company, the Pebble Beach Company (PBC). The first phase of the Reclamation Project included construction of tertiary facilities to produce recycled water from the secondary effluent emitted from CAWD wastewater treatment plant and a distribution system to deliver recycled water for irrigation of seven golf courses, athletic fields and other recreational areas within Pebble Beach.

The first phase of the project was financed by Certificates of Participation which were executed and delivered at the direction of the MPWMD in December 1992 in the amount of $33,900,000. The PBC guaranteed payment of debt service as well as any operating deficiencies. Construction of the Project began in January 1993 and was completed in October 1994. Pursuant to the agreements between participating agencies, the District owns the distribution system assets, including approximately seven miles of reclaimed water distribution system pipelines, a 2.5 million gallon storage tank, and a potable water pump station.

In addition to the assets listed above, in December 1998, the District purchased the Forest Lake Reservoir from California-American Water Company (Cal-Am). The reservoir has been rehabilitated, including new improvements to meet the State Water Resources Department Division of Safety of Dams requirements. It is filled with recycled water during winter months when there is excess production at the treatment plant and the stored recycled water is then used during summer months when the irrigation demands exceed the production. The rehabilitation of the reservoir started in March of 2005 and completed in March 2006. In 2009, outlet structure of the reservoir was modified to increase the storage capacity from 105 million gallons to 115 million gallons. The construction costs were financed by the sale proceeds of a portion of PBC water entitlements obtained in return for financially guaranteeing the first phase of the project. The water entitlements are offered to the residential users within Pebble Beach.

Since the completion of the first phase, an average of over 800 acre feet of recycled water per year has been used for irrigation, replacing the use of potable water.